We use cookies on our website. They help us get to know you a little and how you use our website. This helps us provide a more valuable and tailored experience for you and others.

You can revoke cookies at anytime at the bottom of the page.

Commercial flights from next spring
It will be possible to undertake commercial drone flights in Belgium even before the summer. In her new Royal Decree, Minister Jacqueline Gallant (MR) specifies that the use of drones is permitted at a height of up to 10 metres for personal use, and up to 90 metres for professional use.

“In concrete terms, this means that flights will be permitted within the field of vision”, says Tom Verbruggen, CEO of IDRONECT. “For sectors such as agriculture, journalism and security, this Royal Decree will open up a wide range of possibilities and create 2,000 extra jobs in the short term. For the Directorate-General for Air Transport (DGLV), this will mainly involve an enormous amount of extra administration and communication with people who are new to aviation. Incidentally, exactly the same applies to the drone pilots themselves and to the other competent authorities that will need to authorise the flights, including cities and municipalities. With IDRONECT, we are offering a solution for all these partners. IDRONECT is a one-stop-shop for everyone”, says Tom Verbruggen.

From official Royal Decree to everyday practice
IDRONECT ensures that once the Royal Decree enters into force, there will immediately be an excellent process which integrates drone management for all the partners. It is the very first digital solution in the world to connect all the partners in the field of drone management (pilots, operators, authorities, portals and colleges), thus making unmanned flights simple and safe for everyone in a flexible way. The system was conceived by someone with many years of experience in the aviation sector, engineer and pilot Tom Verbruggen, who developed the platform with co-founder and software engineer Chris De Rouck, in close collaboration with parties such as the Directorate-General for Air Transport. Pilots will be able to request and provide notification of flights with a single click.

Saving the government time and money
IDRONECT aims to make flight management safe and intuitive for everyone. Authorities can use the system to approve and authorise flights quickly and easily. The system ensures that the input for the DGLV's administrative process is extremely clear and accurate. The use of IDRONECT will reduce the number of erroneous requests to zero. The documents which end up at the DGLV will be clearly labelled, so the administration team will immediately know what action is required. To give a concrete example, if a professional drone operator wishes to perform an activity with a ‘high risk’ level (such as flying above large crowds), a specific file must be sent to the DGLV. IDRONECT automates this process, immediately asks the pilot the right questions, flawlessly charts the safety risks and ensures that the file immediately becomes visible in the correct manner in the IDRONECT tool used by the DGLV. This will naturally save the government and the pilot a great deal of time and money.

Linked to real-time geo-fencing
The rise of commercial drone flights means that our airspace will suddenly include a large number of new players who often have no link to traditional aviation.

“It's clear that with IDRONECT, we wish to play a significant role in the growth of the drone economy in Belgium. On the one hand, we see our role as being in the administrative arena, where our aim is to simplify processes; and on the other hand, as being in the safety arena”, says Tom Verbruggen. “This is why we have also enabled real-time tracking and geo-fencing via IDRONECT: if a drone deviates from its initially approved course, an alarm will be raised automatically. It will then be down to the competent authorities to take the necessary steps.”

Belgium in a pioneering role
In the only Belgian airspace which is exclusively reserved for drone testing, at Limburg Regional Airport, IDRONECT and the Directorate-General for Air Transport have managed a world first: to unite all the different partners and government bodies in a single tool. With today's demonstration flight, IDRONECT is showing that even in the complex world of aviation, it is possible to make unmanned flights simple and safe for everyone in a flexible way.

In the near future, when Belgium has completed its drone legislation, the circle will also be complete in the areas of administration and safety from day one. Erika Billen, drone specialist at the DGLV, therefore responded enthusiastically:

"Initiatives such as IDRONECT make it much easier for the Directorate-General for Air Transport to give the breakthrough of drones in Belgium an extra boost. We are pleased to be able to demonstrate that Belgian companies and the Belgian government are working together to ensure innovation, and are even leading the way internationally.”

Veerle Heeren, Mayor of Sint-Truiden, is also delighted that her city has been chosen as the launch platform for the new software tool.

"DronePort Brustem was set up to facilitate and accelerate the cooperation between software, hardware and service companies in the rapidly developing field of drone technology. The decision to demonstrate this new software platform at DronePort Brustem shows the importance of and the need for this campus, where innovation and job creation go hand in hand.”

In addition, Tom Verbruggen from IDRONECT is already looking ahead:

“The transport of goods by means of pre-programmed drone flights, which the logistical sector currently regards with suspicion, is still a long way off. As we will be completely ready both in terms of legislation and administration, I am convinced that Belgium is in pole position to become a genuine ‘drone country’. Why don't we invite players such as AMAZON to come and experiment in Belgium? Our administration is ready for it. With IDRONECT, our aim is to have the same impact on the drone industry as Google did on libraries: to forget about paper and gain oceans of time – but now in the skies.”

ABOUT IDRONECT
IDRONECT is the software platform connecting all partners in drone management: operators, pilots, schools, portals and authorities – even the general public. Today, IDRONECT is the only digital solution for the mandatory registration, risk analysis, safety management and live tracking of drone flights in Belgium that is fully operational. Thanks to a great collaboration with BCAA, IDRONECT is able to make unmanned flights safe and easy for everybody. 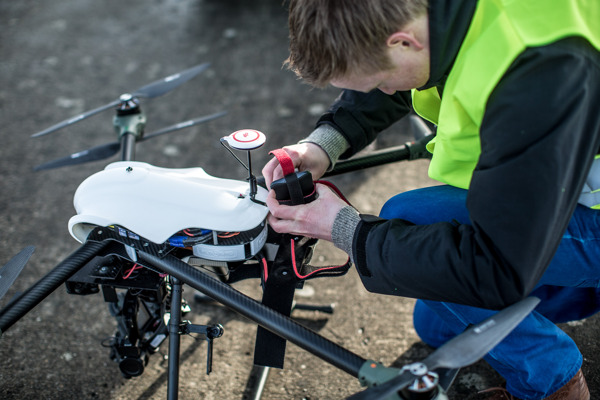 'FAMOUS Relations' is an Belgian PR agency located within the walls of the Wivina Convent in Groot-Bijgaarden. It offers a wide range of services such as media relations, crisis communications, media trainings, content marketing, digital PR, campaign PR and more.

At FAMOUS Relations, good stories are defined as the essentials of PR. That's why its consultants call themselves storyminers in the first place. They feel the unstoppable urge to help organisations and brands find the right story and translate it into a good story. One that inspires journalists, bloggers and other influencers and might also be used as content for organisations owned media. FAMOUS Relations works for clients such as Coca-Cola, Alken-Maes, NN, Garmin, Orde van Vlaamse Balies, Cores Development, Waeg,…